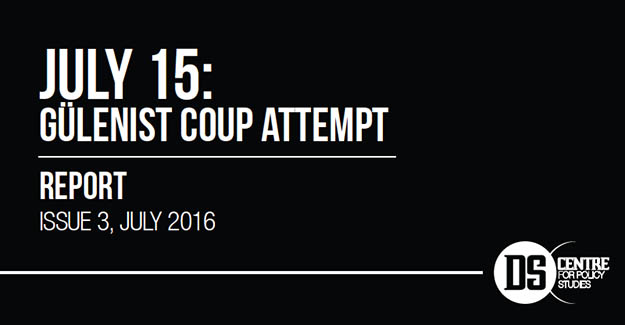 On July 15, Turkey descended into a night of chaos and violence as a failed bloody coup attempt gripped the country, killing 246 civilians and police officers. The group responsible for the coup belonged to a small faction within the Turkish military. Within this faction was a group of renegade soldiers who orchestrated a number of coordinated attacks in both Ankara and Istanbul in an illegitimate attempt to seize key government institutions, including the Presidential Compound and the National Intelligence Agency (MİT). The Parliament was bombed 11 times during the night of the attempted coup while deputies from both the ruling party and the opposition were inside. Tanks and troops blocked the Bosporus Bridge in Istanbul while bombs fell on Ankara from F-16 jets. In an effort to control the media, putschists stormed into the buildings of CNN Turk and TRT, Turkey’s public broadcaster, where a TRT anchorwoman was forced with a gun to her head, to read the coup announcement on live television.

Both Turkish President Recep Tayyip Erdoğan and Prime Minister Binali Yıldırım condemned the coup as an illegal act and ordered security and police forces to restore order. President Erdoğan — who had been on vacation in the western coastal city of Marmaris — used the FaceTime app on his iPhone to connect to CNN Turk. Moments after CNN Turk broadcasted Erdoğan’s speech on live television, the junta soldiers invaded the channel’s building. During his speech, the President called on the Turkish people to resist the coup and march into the streets to defend and protect democracy. All political parties in the Parliament denounced the coup as people began flooding the streets to stop the putschists from seizing power. Erdoğan leaving a Marmaris hotel about 15 minutes before it was stormed by assassin coup soldiers, managed to land safely in Istanbul after skirting past F-16s that were trying to take down his plane. While this coup attempt rocked a nation that has a history of military coups, it also showed the world the resolve, heroism and determination of the Turkish people who rallied for their leader and defended democracy. Recep Tayyip Erdoğan’s upright stance against the coup as well as his call to the nation to take to the streets to resist the heinous attempt were, without a doubt, the most critical and important steps leading to this victory. The resistance of political parties, NGOs  and civilians in Turkey has shown that democracy is a non-negotiable value beyond any argument.

Testimony given by junta soldiers and other pieces of tangible evidence so far point to Fethullah Gülen, the leader of Fethullah Terror Organization (FETO) as the mastermind behind the unsuccessful coup. In the wake of the putsch, the response of the Turkish government – like that of many other European countries that face terrorist attacks — has declared a three month state of emergency in the country and has demanded that the U.S. extradite Gülen to Turkey so he can be brought to a fair trial in the Turkish criminal court system. Cleansing every cell in the state from the influence of this terorist organization, as well as the extradition of its leader Gülen to Turkey in accordance with an existing agreement between the U.S. and Turkey, will be a permanent and important step for Turkish democracy. This report, prepared by the Daily Sabah (DS) Centre, is a compiled work that includes a timeline, locations and profiles of eyewitness detailing the events of the coup on the night of July 15 as well as detailed information about FETO.

The Syrian Civil War has produced about 5.8 million...

Turkey faced a brutal revolt by a group established...

Everyone in Turkey agrees that one of the most...