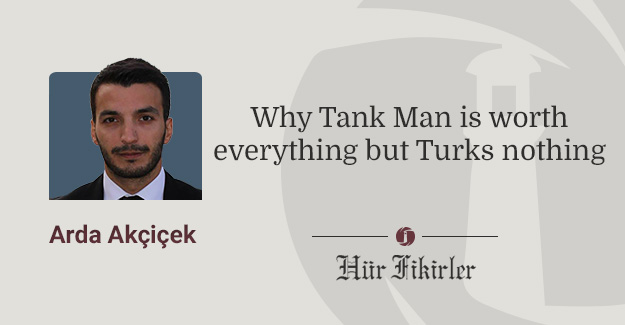 It was June 4, 1989 when an “Unknown Protester” opposed the tanks that were patrolling around Tiananmen Square after crackdown on protests against the Chinese government. Known as the Tank Man, the unknown protestor had become the symbol of braveness and heroism; though he surely deserved such recognition. Nobody certainly knows what has happened to him later, but that one photo of him, opposing a column of approaching tanks in the middle of an avenue, has been used as an iconic image of freedom messages.

At the night of July 15, Turks did the same. They stopped tanks, fought against fighter jets and stood against a military coup for democracy. Around 250 of them died, far more got injured. Thousands of photos showing them capturing tanks, dying under helicopter fire, fighting putschists, have been printed; video footages showed how they entered gun points. However, they were neither recognized nor seen as heroes. Contrary, they were underrated, even insulted. Nobody praised their fight for democracy and freedom. And they probably will not be an iconic image of anything.

World has changed too much since 1989. Obviously, furniture of symbolism has changed too. It does not seem good enough any longer to stop tanks or fight jets for democracy, to be the symbol, at least content of freedom messages in “the free part of the world”. What is recently necessary enough to voice for freedom is press freedom. And how about right to life, or democracy? No one recently cares about them. It is acceptable that people, to some extent, may die, but press cannot be suppressed.

My intention is not to underestimate press freedom, but this seems to me like attempting to discuss press freedom with a Syrian who is fleeing from war; which is completely nonsense. I mean, right to life is more worth to voice than press freedom for a Syrian whose life is in danger. And that makes right to life more vital than press freedom and that means some rights and liberties might be prior to others. It seems like this understanding has been lost in the Western world. And it makes those in the eastern part feel like nothing but worthless lives.

In the morning of July 16, after a bloody night, when Turks achieved to repel the coup attempt, the first thing they heard from their European and American friends is a lecture on puthschists’s human rights. I would easily respond to this with “Com’on” if I was on a TV show and that show would surely be Late Night with Jimmy Fallon. The thing is, I am not on a TV show and this is not the first thing that people who saved their own lives with their bare hands, want to hear in the morning of a bloody night.

It is strange to see that after the Cold War, reactions of Western societies increasingly have become identical with their foreign policy. No need to go that much back in time, we have recently witnessed in the Syrian Crisis that it is now impossible to hear any voice different than their foreign policy chiefs’. Many European administrations have left hundreds of Syrian refugees to death while they were trying to find a safe shelter and no opposing voice came out of these societies. And in the morning of July 16, the same happened. This has been disappointing for many in the Eastern world to see many Western-claimed principles of values like democracy, are being violated by their so called representatives. This makes the West to lose its moral virtue and distinction and thus, its criticizing position.

Why Turkey should matter to Europeans

In fact, the answer is so simple: There a...

After 03:00 and President Erdoğan’s arrival in Istanbul, I...

The Forgotten Liberalism Within Islam

Today, in most minds, the words “liberalism” and “Islam”...