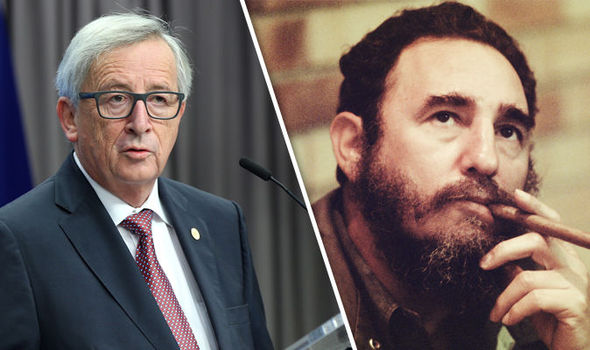 I have recently been emphasizing on incapability of EU administration to deal with worldly matters. And Mr. Juncker, president of the EU Commission proved me right one more time when he posted a tweet last week, remembering Castro as a hero of many. It was impossible for an experienced politician like Juncker not to know that Castro and his revolutionist friends brought death, poverty and misery to the whole country and compelled Cubans to agonize under a socialist dictatorship. If he was a sympathizer of a murderer, he would show the similar sympathy to other murderers of the world; but he was not. His sympathy is most likely for socialist dictatorships and it obviously does not matter to him how many they killed.

Juncker’s praise to Castro is obviously motivated by his collectivist background but there is a worse matter with him. He looks like suffering from a deep confusion and it is not only him but most of other EU technocrats look confused too. And this is not only affecting them but EU’s future too.

People hardly mention about what a huge failure it was for EU administration to make Brits take a Brexit decision. However, it was a mass and Europeans have slowly started to recognize it. Britain’s concerns and demands have not taken into consideration since EU administration sees the union as a club that acts on its own interests and when the time comes, that can break its own rules. However, EU was not established on that spirit. It has never meant to be a mechanical organism that when a country becomes a fit-shape, it can be the part of. EU has been a peace project above all and when this very first principle was noticed to be broken, the organization has lost its spirit. Noone saw that making Brits to take the decision of staying in the EU was much more important than EU procedures or bureaucratic accuracy. Maintaining relationship with UK within the EU perspective should have been the biggest concern beyond all details because EU was exactly for keeping countries attached to its fundamental purpose.

And now he is adding one more mistake to his career with being reckless to Turkey’s EU membership negotiations. He wants Turkey to decide whether they want to be a member or not. And he seems to be really convinced that it is that easy to make that decision. Is this how he thinks the world works? What would happen if Turkey went to referendum and decide to put an end to membership negotiations? What would that cost to Mr. Juncker? More importantly what would that mean to the future of EU? A European nation is being threatened with deprivation of privileges of club membership? Juncker should understand that if it is a club membership that we are talking about, then we need to admit that people are free to look for alternative clubs with better privileges and they don’t get criticism out of it. However Turkey obviously doesn’t see it as a club. They see themselves as a natural part of Europe and well deserved candidate of EU membership. That’s why they have been there since the beginning and have been trying over generations.

Juncker keeps the record of the longest term democratically elected prime minister in power and it must be in his best knowledge that bureaucrats suffer from fish bawl effect. Their lack of vision helps to show matters risk-free but not for so long. When matters change after all, bureaucratic motivations start to become troublesome but nothing more.  They cost a lot to politicians and the people. Thus, they are needed to be taken under control. If European political leaders do not run the show again, EU bureaucrats seem to cost much to Europe. And Turkey looks like the next deficit.

After President Erdoğan appeared on TV, we learned that...

I have recently been emphasizing on incapability of EU...

Turks have been blamed for a while, with turning...