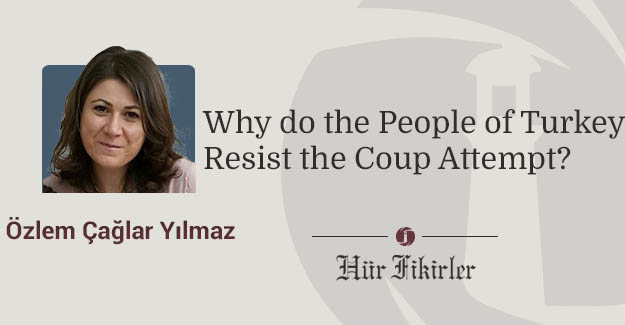 Turkey faced a brutal revolt by a group established in the military on the night of 15 July 2016. For those who have followed closely the attacks in the recent 3 years particularly starting along with an attack to the National Intelligence; Gezi Protests, and the reactions to the government’s historical resolution process with PKK in 2013, this coup attempt was not that surprising yet the brutality was really shocking. Moreover, ordinary people, especially those Anatolian people considerate about their civil liberties have already been alert to the activities, approaches of the extensions of this group not only in the civil bureaucracy but also in the civil organizations all around Turkey. Namely the members of this Gulenist group whose leader is living in Pennsylvania since 1999 is mainly responsible with the coup attempt as already confessed by the members.

Depending upon the coverage of international media in recent three years in line of a propaganda on the “Erdogan is a dictator, Turkey is going to an elective authoritarianism” not only the Western media but also the independent classical liberal, libertarian intellectuals, think tankers analyze the coup attempt totally leaving this Gulenist group established in the Turkish bureaucracy out of their analysis. On the other hand regarding earlier experiences in Turkish history, the main assumption of some of these fellows is that it is the secularist Kemalist military revolted the “Islamist” AKP government. To some extent this false and/or missing approach could be tolerated when we acknowledge that they lack the diversified knowledge based data in English on the happenings in 3 years. And the propaganda made close doors to any other late resources if it is not anti-Erdogan, but even balanced and/or reasonable.

I have three simple responses: 1. It is not the whole military, but a group whose members are mainly led by a religious masked community and cooperated with some other pro coup officers.

Throughout my analysis in years in various platforms on Turkey, I kept emphasizing that the biggest problem of Turkey before pushing reforms to limit the state/ government and expand liberties is the bureaucratic establishment which has been strengthened after every coup since the transformation to democracy in 1955. Competitive political arena is kept to very limited borders. Including the AKP era, bureaucratic establishment with its military, security, intelligence bureaucracy including other communication, education, public bids administration, judiciary has been the safeguards of this regime, surpassing the responsible politicians.

AKP with Erdogan challenged this bureaucracy, and tried to reform the bureaucratic system in favor of open competitive politics, furthermore via initiating democratic reforms and expanding liberties of non-Muslims, ethnic groups and Kurds, as well as freedom of speech and freedom of association. There have been reforms stepped out first ever throughout the Republican history. Via opening up markets particularly air transportation, education, and health to competition and making the bureaucracy keep in budgets changed the economic structure. The extensive infrastructure investment and freedoms opened the path for pluralism and prosperity which is hard to explain with limits to AKP and Erdogan verbal. The revival of independent entrepreneurs all around the country, the diversity of civil society are the real strength of the country as of now.

On the other hand, it has been very difficult for anyone to tell out about the secret group which has been working for about 30 years, whose members have been hiding themselves not only in the bureaucracy, but also in the civil groups, academia and media doing intelligence work everywhere collecting information about people and using it to control, to blackmail people. This is a long story. Wisely instead of going into politics with a separate political party to gain power in the state this path was chosen by this secret group. They controlled the judiciary, the police, the military out of the hierarchy and irresponsibly to the democratically elected authorities. Their members made up fake evidence, filed up cases, put people in jail who had not obeyed them, who had not given them money, and who had prevented them to illegally operate. Prominent businessmen, media, many MPs have been afraid of them not from Erdogan. Ordinary people had known them very well. This is why ordinary citizens supported AKP in the recent elections in spite of its fallacies, since AKP has been a civil political party which did not engage in deep bureaucratic state, but attempted to change it. To change means making the irresponsible bureaucracy accountable to political power, which can make mistakes and subject to critiques. There are various other English resources which I invite to follow without any prejudice on incidents and details other than The Economist, the BBC, the CNN international, Fox News, the Independent, the Guardian, the New York Times.

Meanwhile Turkey has a very strict civil officer code (Article 657) which makes it almost impossible to prosecute when one is engaged in unlawful acts. This is the main reason of announcing emergency state. AKP government has been so late in finding out and filing cases against those in the bureaucracy who are acting irresponsibly, to give lightest examples such as giving the questions of the central exams to become civil officers to their members; preventing those who are not their hidden members in the academia to be appointed to their PHd degrees, professorship cadres; filing up unfair prosecution cases. Recently, and particularly after the coup they have been more disclosed and being criticized openly and all violations are being told, they have lost their veil of as if it is a civil charity organization. Their group in the military initiated the killings, bombings of civil people, the Parliament, the Security Administration, the National Intelligence in the coup attempt on July 15.

To say “to sound naively” and broadly, considering the international voice against Erdogan, and those some inside Turkey, the coup plotters considered they could have been successful. However, big civil masses did not let this. Including the opposition parties and the mainstream media, and businessmen there is widely resistance against the coup attempt. The main opposition party CHP organized a rally against the coup attempt and AKP supporters and others also joined on 24 July in Istanbul.

With regards to the act in the universities, the centralized bureaucracy for universities administration has already been problematic with extensive administrative powers. The recent decision of making deans resign has nothing to do with academic freedom, freedom of speech, this is to deal with the illegal, unfair administrative operations of the deans, and members of this group hiding themselves. But we have to watch out the procedure in the coming days. The emergency state decision shall not reflect upon civil life, but only in the bureaucracy to lately inspect all unlawful acts which violated the freedoms of every citizen. We shall watch the proceedings in details.

Recent developments not only provide an opportunity but also prove hope for reconciliation and cooperation among different political actors for a new constitution and other reforms for a free, plural political and economical system.

The awful sad coup attempt took away many valuable lives, that is a wordless deep sorrow. One can’t imagine the terrible consequences if the attempt was successful. This fatal attempt seems to urge to go to zero point with the bureaucracy and strengthen the institutions of liberal democracy in Turkey via constructing a transparent responsible state organization under rule of law where citizens prove a closer watch.

There need to be some final notes taken on the support of classical liberals to the Turkish government. This is a reserved but principled support against the anonymous bureaucratic powerful actors to the democratically elected legitimacy. Nonetheless to be fair the present governing party has shown the highest open democratic performance to challenge the bureaucratic powers, reform the system in favor of liberties and listened to civil actors to revise its position, particularly Erdogan.

So in terms of keeping in legitimate fields of competitive democracy, liberals around the Association for Liberal Thinking already have continued to constructively criticize the government to make reforms, constructively criticize other political actors and opposition considering that they are important for strengthening liberal democracy. When doing this liberals of ALT, praising the legitimate borders of open competition in politics, already kept away from active politics and political privileges; and valued civil society and free markets as the fundamental drivers of civilization.

Since this secret organization worked very well for the past 30 years or more to invest in lobbying, educating their members, they have been more powerful in extending their preferred messages outside of Turkey. Meantime, ordinary citizens who had deprived for a long time of their individual liberties, opportunities to prosper and educate their kids, join in social life, have just opened up their eyes recently and claimed for their liberties. And international media is mainly connected with the members of this abovementioned group along with others of secularist elites. That is why the lacking analysis of classical liberal /libertarian fellow friends might be tolerated abroad. There is already a lot to invest in liberal pluralist ideas within the country which we failed to work for outside until recently.

The following remark is that anyone telling about Turkey in the recent years excluding the existence of this secret organization in the bureaucracy could hardly convince classical liberals such as the members of ALT about the consistency of his analysis on the state of freedom in Turkey.

What the fellows at the Association for Liberal Thinking are trying to do is to invest in individuals to recognize and learn the ideas of free society acting with their free will, and to discuss with them when they oppose openly. We have always valued the free speech, free discussion at our programs so as to let the individuals to develop their analytical thinking and contribute to the rich intellectual tradition of civilization based upon limited government, civil society and free enterprise in Turkey.

Finally to have hopes for near future, our fundamental observation for years is that individuals eager to learn and considerate about liberal ideas are coming mainly from smaller cities away from privileged elites, as there are few exceptions. Just like Hayek addressed wisely “The intellectual revival of liberalism is already under way in many parts of the world”. We turn our eyes to the common sense of ordinary citizens minding the value of life, liberty and property and being alert to the real attacks from central powers.  And they have just started engaging with the world to tell their stories, to contribute to the struggle for free and peaceful societies.

Why Is Erdogan Being Demonized in the West – Soumaya Ghannoushi

Many masks have slipped since Turkey’s failed military coup...

I have recently been emphasizing on incapability of EU...

Coup Attempt in Turkey: Many Failures, Many Prospects – PODEM