Military Coup Attempt: What I saw and lived 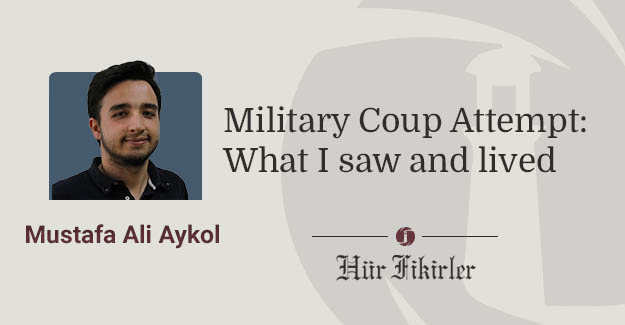 15 July 2016 night has a peculiarity about being a historical night in anyway. The uprising of a group of soldiers in Turkish Arm Forces has been counteres by the honorable stance of politicians, media and public. Meanwhile Turkey was so district and had a democratic posture against to juntas. I’m at esplanades since I first heard the treason felony. As a social scientist candidate of future, I’m trying to do my observations and get public’s thoughts.

As we all know; treason felony has turned into a case that should be analyzed in many ways or at least think over after military’s failure. However I want to share what I lived, what I saw and also wanna leave a not to history rather than commentating. After all, it is flying font.

The night when treason felony happened, I was trying to finish an article which I was studying on my computer. It was near half past ten. First messages started to coming. Information of some soldiers were discharcing the bridges in Istanbul has come. I checked the news and social media as soon as I heard. There was a horrified knowledge pollution. Someone said soldiers may have got an intelligence while others were far more pessimistic. We heard the F-16 planes started doing low flight in Ankara. While we were trying to understand what was really happening. Puzzle pieces were getting united. And the picture that about to be clear was painful picture which every Turkish people knows: Military Coup.

I knew how dangerous it could be for countries, for people and for democracies even though I haven’t witnessed any military coup. After Prime Minister Binali Yıldırım said “This is an attempt!”, we understood it was a treaosn felony and we went to City Esplanade (Now the place is called Democracy Esplanade). Noone knew anythink while we were going to City Esplanade. Life was keep going as usual. When I came at esplanade I didn’t come across with such a massive crowd as I expected. Sakarya Deputies Recep Uncuoğlu and Ayhan Sefer Üstün were out there. I went to tell them that they shall never be afraid of nor step back and said this public will be next to them. Deputies and public were both nervous. There was no sign of what was going on, no sign of President Erdoğan, no sign of Sakarya Governor Hüseyin Avni Coş. Meanwhile we heard the Governorship was under attack and captured by soldiers.

Sakarya Metropolitan Municipality Mayor Zeki Toçoğlu first made a short speech and asked for the people call all of their contacts to streets. At that time three or five public bus came to station. Upon this, Zeki Toçoğlu took back the microphone again and told us those buses would go to the Governorship so we could use them.

Such a nervous air was dominant while we were going. However this air disappeared after President spoke. We got off from bus before governor junction. Aslo people were flocking with their own cars. Cops has closed the path and alined along the road. The right side of Governorship path was closed with tank and military vehicles. Soldiers started firing to air when people decided to walk into building. Police answered them back too. I saw people were getting shooted and carried on someone’s shoulders. Neverthless noone was returning. So many gun sounds has heard from building. There were blood on paths. However military coups who saw crowd was increasing, couldn’t resist anymore and taken with an ambulance. There were people from in each segments. Veiled women, old women, young girls, lads with hurted foot, idealistics, kemalists…

With this honorable resistance of public, the Governorship has taken back. Police made sure of safety. Celebrations started just after the Governorship has cleaned from military coups. I saw ten thousands of people at esplanade despite how late it was. There were judgement crowd. Not only esplanade but also the bazaar of the city was more crowded than morning. Public has resisted against to coup and successed. The night of 15 July attach to 16 July was a night that has got through with golden letters in history of democracy.

What Happened? A group within the Turkish army associated with...

One should not expect a cure-all magic package but...