Turkey Integrates Syrian Refugees by Treating Them like Economic Contributors 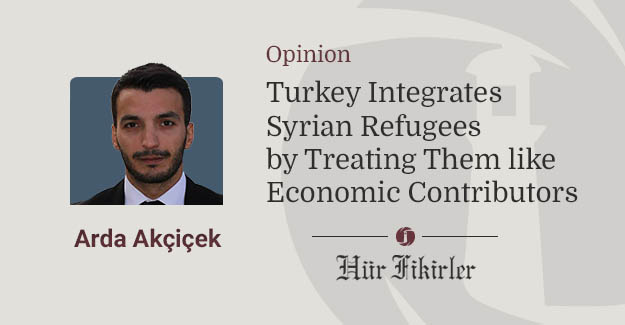 The ongoing civil war in Syria has displaced millions of people, many within Syria itself, but the majority of refugees are trying to find new homes and political asylum outside their war-torn homeland. Macedonia has closed its border with Greece, preventing passage through the Balkan trail to Western Europe, so thousands of Syrian refugees are accumulating in Greece each week. European nations have had an influx of more than a million refugees, and they struggle with Islamophobia, xenophobia, cultural chaos, and increased expenditures from their expansive welfare states. Refugees are a crisis almost everywhere, but it’s a different story in Turkey, which has welcomed more of them than any other country. By treating refugees as economic contributors rather than as a deadweight burden, Turkey has largely avoided the turmoil experienced elsewhere.

When the Syrian civil war began in March 2011, the first refugees arrived in Turkey to find asylum. As the war escalated and millions started to be displaced, the number of refugees increased instantly and reached nearly 3 million by March 2016.  Turkey has applied an open border policy for Syrian refugees, and has established no quota. Still, the country has faced no social, political or economic crisis over Syrian refugees during these past years. This can be attributed largely to the fact that Turkey has not implemented strict control over the refugee resettlement process.

Turkey does not grant refugee status to those who seek asylum from Middle Eastern countries like Syria. Although Turkey is a signatory to the international Geneva Convention on the Status of Refugees, it has always maintained its own geographical exceptions to the agreement — only granting refugee status to Europeans seeking asylum. Rather than attaining refugee status, Syrians instead found asylum in Turkey as “guests,” which at first did not grant them official legal status in the country. In 2013, the Turkish government granted Syrians temporary legal status, yet still not full status as refugees.

Although perhaps counterintuitive, this approach has actually helped Turkey to integrate such a vast number of refugees without the debilitating effects experienced by other countries. The Turkish government has intentionally ignored work permit rules for Syrians, despite the fact that strict rules ordinarily apply to foreigners’ economic activities in the country. Native Turks and Syrians have therefore taken the opportunity to conduct business freely with each other, which allows them to solve problems spontaneously and to mutual advantage through market processes. Bypassing work permit rules also makes contracting with Syrians easier and less costly, so they are able to find jobs and housing, earn their own money, and take care of their families. They don’t have to wait for humanitarian aid to put food on the table.

The process through which Syrians become involved in Turkish labor and business markets has been so streamlined that refugees have become routine suppliers of goods and services. They have established new businesses and employed others, including vast numbers of Turkish citizens. They have increased investment, production, and employment capacity throughout many of Turkey’s economic sectors, and have boosted market competition. Studies that collect data on the economic impact of Syrians within the regions where they predominantly live show that as the rates of employment, exports, and imports increased, the consumer prices for goods and services fell. The data also show that 52 percent of Turks support the economic activities of Syrians.

Essentially, Turkey’s successful approach to the refugee crisis has been to avoid solving problems with welfare as much as possible, instead easing the integration of Syrians into the Turkish economy. The European Union (EU) is the largest welfare organization in the world, and refugee status brings with it welfare entitlements. Europeans therefore think that they cannot afford an influx of refugees, because they view the displaced Syrians as costs rather than economic benefits. A recent study suggests that resettling a refugee in the United States for five years costs around $65,000 in taxes, and Germany has already allocated approximately €17 billion to spend on refugees in 2016 — although experts say the bill will be higher. More than any other EU leader, German Chancellor Angela Merkel bravely opened her country’s borders to refugees but ultimately paid for it by losing votes to an anti-immigrant party in the recent regional elections.

Turkey’s approach of treating Syrians as economic contributors, however, allowed the country to offer asylum to millions while avoiding negative economic and political repercussions. Their economic integration also catalyzed the process of social integration into Turkish society. The Syrians have achieved living together in peaceful, cooperative community with Turks without the social disorder that has led to drastic counter-measures elsewhere, like the border closing in Macedonia.

Despite Turkey’s overwhelming success with its own approach in handling the refugee crisis, EU interference may well bring about a true crisis in Turkey after all. EU officials maintain that one of the reasons so many Syrian refugees try to move on and settle in Europe is because Turkey does not grant them the welfare benefits that come with refugee status. The EU recently pushed through an agreement with Turkey that will mandate greater welfare expenditures and tightened control over the economic activity of Syrians — including hiring quotas, social security contributions, minimum wage requirements, and more.

Once Turkey begins to enforce these new regulations, Syrians will be more expensive to hire and their comparative advantage in the Turkish economy will be lost. Syrians will no longer find jobs so easily, because employers will prefer to work with Turks again instead if the employment costs of outsiders are the same as the costs for natives. Rather than learning from Turkey’s success with Syrian refugees, Europe may well succeed in imposing its crisis on Turkey as well.

Randal O’Toole: “Akçiçek’s research underscores my conclusion that problems other countries are having with refugees are merely symptoms of deeper problems with those nations’ regulatory and welfare systems. Those problems should be corrected even if there were no refugees. Turkey’s relative success in handling the refugee crisis may give other countries an incentive to fix those problems now.”

Everyone in Turkey agrees that one of the most...

Turkey’s July 15 resistance against the coup attempt is...